Why the New Klout Might Be Worth Your Brand’s Time

While the digerati has been a-buzz over the past year, I’ve held off writing about Klout for one reason. This blog sits at the intersection of branding and social media and works to help businesses build more social brands. And to date, beyond being an interesting and somewhat controversial measure of social influence, Klout hasn’t directly aligned with that mission. Until now. Yes, friends — because of a few recent tweaks it’s time to talk about Klout here.

Klout has been in the news a lot lately, both good and bad. On the downside, this social popularity contest has been misused by everyone from employers to college professors resulting in the tool being seen by some as an instrument of online profiling. On the positive side of the ledger, Klout recently released an update to their influence algorithm. Last week users got to preview a redesigned interface with new features.

For those that need help decoding these updates and unpacking what Klout really has the potential for offering brands, here’s an overview featuring the good, the bad, and the ugly of social media’s emerging “standard of influence.”

It’s hard to deny that Klout has made some pretty major improvements recently – in both form and function. 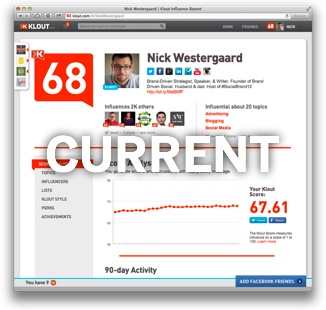 Function — Last month Klout rolled out of an updated version of their algorithm that calculates social influence and produces your Klout score. The new formula gives greater weight to actual social activity (mentions, likes, retweets, comments, etc.) beyond simply having a profile and a few followers. Also included is a user’s Wikipedia entry (if they have one) and inlinks to that page. The new algorithm has resulted in an updated Klout score for many.

Among the less significant results of this update is the fact that President Obama now enjoys a Klout score of 99 while Justin Bieber has fallen to 92. An early criticism of Klout’s measure was the fact that “the Biebs” used to be the most influential with a greater score than the President of the United States. Beyond being fun cocktail conversation this signals that Klout is working to tie online social influence to real-world influence. 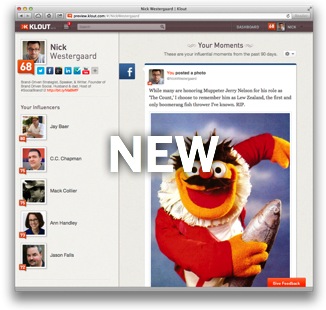 Form — Last week Klout also started previewing a new user interface design (you should be able to try it out here). In addition to being more aesthetically pleasing this new design takes major steps toward positioning Klout as more of a social network. The interface has shifted users’ profile photos to the web-standard upper left corner of the page. Influencers now follow below the profile info, also on the left-hand side.

Perhaps the newest addition to your Klout profile is a series of ‘Moments’ that cascade chronologically down the page in order of recency — not unlike your Facebook profile timeline or wall. These Moments present your shared content on various networks that you have connected to Klout. On the surface this could seem like a cosmetic feature. However, seeing snapshots of the pieces of content you’ve created that are the most engaging across social channels gives you an idea on how and why you or your brand might be influential across the social web. (And yes, as you can see, New Klout seems to think that currently my most influential moment was a Facebook post on the passing of Muppeteer Jerry Nelson.)

The mobile experience has also seen recent upgrades making it easy and kind of fun to give someone “+K” (Klout’s topical currency) with a quick swipe of the finger.

Though the redesign has made Klout more like a social network it still has a ways to go. It’s not 100% clear what brands should do here. For example, you now have a dashboard when you login similar to the Facebook news feed with updates from your various networks. However, all of these items can be observed on other platforms (retweets, mentions, etc.) and don’t offer any new information or insights.

The new features make the network slightly more dynamic but they really don’t make it any more social or interactive. Klout is largely still an online reference point.

To quote Ben Parker, “With great power comes great responsibility.” Klout, or something like it, has the potential to be an incredible tool for measuring brand reputation and demonstrating brand value. However, powerful tools in the hands of those who don’t understand them can be used for great harm.

Case in point, recently a Florida State University professor revealed that he would be including students’ Klout score as part of their overall grade. Marketer Sam Fiorella has also documented his own experience being denied a job because of a lower Klout score.

These are classic examples of unproven information in the hands of those who don’t know any better. While both stories offer experimental ideas neither employment nor grading have precedents for factoring in influence much less making it a conditional component of employee selection or classroom success. With a proven measure (more on that below) something like influence could be used alongside other tools in a multiple-hurdle approach in very select scenarios but we’re no where near being able to do that.

What Does This Mean? 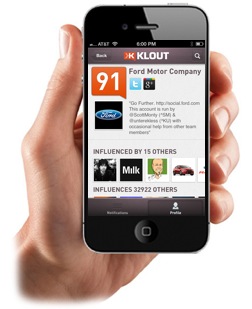 It’s become a favorite pastime of many social media professionals to rip on Klout (including me every now and then). While it continues to struggle to define what it is and how it’s used, I believe that there could be a space for a measure of social influence.

How does this impact our brands? Communicating brand value has taken many shapes through the years. In the past, an established brick and mortar presence was critical in letting the world know that your brand was a going concern. This is no longer the case. Having a large staff is a similar dated benchmark of an established brand.

Increasingly our brands are built online by fewer people and without brick and mortar monoliths. A drawback here is that anyone can pretend to be anything online. How can we really tell who has impact? Beyond building our own brands it’s also important to understand the brands of those that we’re doing business with and those who reach out to us on social media. As such, the nascent social CRM industry is working to “bake-in” influence measures as salesforce.com has done with their recent release, which includes Klout scores and other social indicators.

Both instances require a valid and reliable measure of influence and overall brand value. Will this be Klout? Perhaps but not without an ironclad algorithm and a key understanding of what the measure means and what it does not.

What do you think about Klout? How do you see social influence impacting social media marketing?