Early in my career, I spent my commute listening to audiobooks in my 1996 Ford Taurus. The tinny car speakers shook as Tom Peters spoke about excellence and management by walking around. Through landmark books such as In Search of Excellence, The Pursuit of Wow! and his latest, The Excellence Dividend, Tom challenges conventional wisdom with an unparalleled bias toward action. I’m thrilled to share my conversation with Tom Peters on this week’s On Brand podcast presented by Twenty20.

Tom Peters is a leading business management guru and founder of the Tom Peters Company. He continues to be in constant demand for lectures and seminars. In 2017, he received a Lifetime Achievement Award from Thinkers50 and the Jack Covert Award for Contribution to the Business Book Industry from 800-CEO-READ. Peters is the bestselling author of seventeen books, including In Search of Excellence (with Robert H. Waterman, Jr.), which is often cited as among the best business books ever written. Arriving at an equally troubling time, his latest book, The Excellence Dividend, is a self-described “sequel of sorts” to this modern business classic. 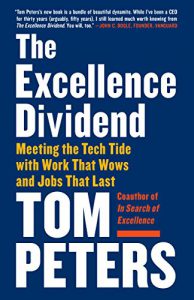 Tom’s work has inspired me my entire career. But I had to ask … Why write another book? “There are significant consistencies,” Tom noted with what was happening when In Search of Excellence was first released and now. “And we still haven’t gotten it! Every 60 months or so, I’ve just had it up to my eyeballs and I sit down and write another damn book that says do your managing by walking around.”

The Brand Called You at (Almost) 20. Tom’s landmark 1999 essay and book, A Brand Called You, offered the first-ever major work on personal branding. And it’s as true now as it was then. “Nineteen years later, it’s a survival necessity. You can no longer survive as #129 (on your employee badge). You have to be someone that stands for something.” We also spent some time talking about why personal branding is still misunderstood.

“Hard is soft and soft is hard.” Tom offered his insights on the true nature of the key skills involved in business today. The hard stuff — numbers, for example — are really soft. And the soft stuff like culture is actually really hard.

Business education today. Tom is on a quest. “I want the MBA to stand for a Masters of Business Arts.” Citing author and organizational effectiveness expert Henry Mintzberg, Tom noted that while MBAs are hired more and make more at graduation, 20 years later liberal arts grads have risen to more leadership roles. It was at this point that Tom complimented me for having a theatre arts degree!

Tom and I may be sending Mark Zuckerberg a copy of The Darkest Hour. One of my favorite things about Tom’s writing and speaking, are the parallels he draws to great leaders in history. FDR and Churchill weren’t experts at economics and military strategy, but they inspired. They led. Zuck could learn a thing or two in navigating the current crisis at Facebook.

What brand has made Tom smile recently? Like much of his thinking, Tom is in a class of his own when it comes to citing smile-worthy brands. While Apple, Nike, and Southwest Air are oft-cited, Tom provided the inaugural listing of Ziplock bags. They do everything — from keeping your iPhone safe to making a cool sound when you close them. You’ll never think of Ziplock bags the same way again!

To learn more, go to tompeters.com or excellencenow.com.

Before we go, I want to flip the microphone around to our community …
This week I want to give a shout out to the past guest who got the ball rolling on this week’s interview. My third guest ever in the history of the show was Dorie Clark who told me I should try and talk with Tom. She made some connections, I sent a few persistent emails, and a few years later — here we are!

Thanks again to our sponsor Twenty20. Your source for on brand photography for your brand. You can get five photos with Twenty20’s one-week free trial at Twenty20.com/OnBrand.