To be clear, this is not a political blog. This is a brand-driven blog. Political campaigns in America have been brand-driven since the days when advertising pioneer Albert Lasker advised Warren G. Harding to the modern era where Donny Deutsch helped package Bill Clinton’s run. This blog is also about new media, which has become a critical tool in both political campaigns and in business. Plus all politics are local and I’m Iowa-based putting me at ground zero to see many of these brands launch. I’m also a political junkie and occasional campaign operative. So periodically, I’ll offer my insights on BrandDecision 2012.

The First Brand
The 2012 race to the White House saw the launch of one of the first major brands/candidates this week. With a seemingly wide open field on the right, it was something of a shock to have the first brand out of the chute be the sitting President of the United States. On one hand, this is surprising as most incumbent presidents rest on their laurels for as long as possible thus asserting their position of power as the sitting chief exec before they have to abdicate and become a ‘candidate’ once again. It’s considerably less surprising, however, when you consider the Obama campaign’s history with the two topics that are the central focus of this blog — branding and new media.

Anchored by a Strong Brand
Few political campaigns have embraced branding and strong visual identity as whole-heartedly as Team Obama. Like many, I’ve always been fascinated by the Obama logo mark. That’s because it’s as close to being a blatantly commercial logo as any political entity. Forgoing the usual clip-art stars and stripes, Sol Sender and co. worked to craft a versatile mark that can not only stand alone but can be featured as part of keywords that reference the campaign’s core themes (Hope, etc.). Ironically the closest recent example is George W. Bush’s ‘W’ mark but even this doesn’t connect with supporters at the same level as the symbolic ‘O’ icon rising over the heartland.

Icons are a key element of every successful brand in the business world and beyond and yet it’s amazing that so many political brands skip this critical cornerstone for creating a memorable visual connection.

In January 2009, the Obama team showed impressive foresight when they decided to morph the Obama ’08 campaign logo into the mark for the Organizing for America grassroots group. This may sound like a small detail but because of this move, this logo has been continuing to reach core supporters weekly in emails, online, and more. As the campaign suits back up for the 2012 battle this week, their asset has accrued even more brand value in the off-season. In keeping with their incorporation of the mark into campaign themes, their ‘2012’ teaser art sets the stage.

The other huge benefit in developing a strong visual brand? Chances are you’ll have supporters who’ll pay enough to wrap themselves in your brand via t-shirts, hats, stickers, and more. Again, this sounds like a small detail but Team Obama had a stocked online store with updated merch when they launched their re-elect last Monday with an email message to supporters … 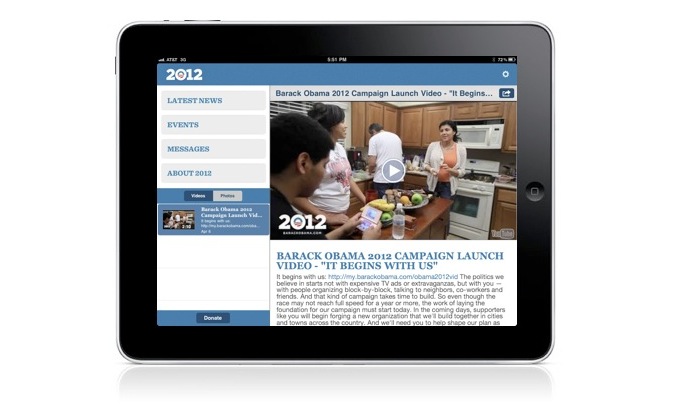 Progressive New Media Strategy
In 2008, the Obama campaign’s most regular connection with supporters was through their inbox. With regular email marketing, their database swelled up to over 13 million contacts. This created a force to be reckoned with both in terms of organizing volunteers and raising funds. This made email the obvious channel for Monday’s re-election announcement.

The campaign also choreographed an effective video to launch the re-elect. I say choreographed as there’s some effective devices used. First, the piece is dripping with Americana — rows of small-town houses, flags, churches, Main Street. The core message of the video is delivered via interviews with ‘regular folks’ including key demographics like college students and Latin Americans from critical states like Michigan, Colorado, and North Carolina. ‘It begins with us,’ they stress making the early-launch re-elect message very clear. Who cares about the presidential election this far out? Core supporters. The inner circle. The hubs that move the spokes. This launch effort is designed to wake the army up and get them energized for the task ahead.

Using supporter interviews to deliver this message also solves another challenge at this early stage. As campaigning from the White House is something of an ethical gray area, the interviews make the launch more “people-focused” while at the same time conveniently keeping the President from having to step in and personally deliver this ask.

Supporters clicking through to the video were invited to share it on Twitter and Facebook, with the latter featuring an aggressive ad push as well. Once on the campaign’s Facebook Page, supporters can push out a status to their network announcing ‘I’m in’ with a link back to the campaign. iPhone and iPad apps also seamlessly updated with ‘2012’ identity systems and campaign information. And this is no doubt the tip of the campaign’s new media iceberg.

The Brand-Driven Insight? There are several practical brand-driven insights applicable to business brands (and really any brand) in the Obama campaign’s 2012 relaunch:

In 2008, Davids Plouffe and Axelrod mounted an impressive campaign that catapulted a junior senator from Illinois to the Oval Office by leveraging classic brand-building tools and an innovative new media strategy. As the calendar gets closer to 2012, the O team is making it clear with the early launch of their re-elect that they won’t be owned in these areas. The issues are another story but the communications machine is fired up and ready to go.

As other candidates officially jump in, I’ll offer brand/new media commentary — no issues, just packaging — here as we continue to navigate the waters of BrandDecision 2012.