Crowd Work: A Case for Not Removing Blog Comments

Crowd Work: A Case for Not Removing Blog Comments

Recently the popular marketing site Copyblogger announced that they would be ending comments on their blog. In their post explaining this move, they outlined several sound reasons for making this switch — conversations about content are shifting to social networks like Facebook and Twitter, less spam, etc. I kept thinking about this big decision, formulating my own take. It came to me last Saturday night on Exhange Street in downtown St. Paul, Minnesota.

Of course the most important caveat to put in front of all of this is that there’s no one-size-fits-all answer to any marketing question. It’s up to every brand to make their own decisions about what works best for them. The most consistent teaching among digital marketers has been that comments are an important indicator of your conversational reach and social media engagement.

However, the folks at Copyblogger make several valid points that bloggers of all shapes and sizes can identify with. Managing comments, especially on large, high-profile sites such as Copyblogger, is a tremendous commitment of time and resources, not to mention the burden of sifting through high quantities of spam comments and moderating tedious disputes. And most have observed a decrease in comments due to off-site conversations on Facebook, Twitter, and Google+.

In short, there are several good reasons why you might remove comments from your blog.

Let me explain why I’m keeping mine. 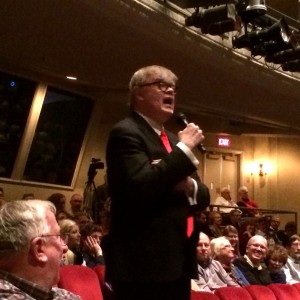 Last weekend I had the pleasure of seeing a live broadcast of A Prairie Home Companion at the radio show’s permanent home, The Fitzgerald Theater in St. Paul. As a longtime listener, this was a dream come true. It was also fun to be there with my father and business partner, Dean Westergaard.

Host Garrison Keillor entered through the audience, singing his way to the stage. From there, the show unfolded much like you hear it on the radio. However, at the beginning and end, Keillor reminded the audience that he’d be out front if anyone wanted to talk afterwards.

As we made our way out the front door and onto Exchange Street following the show, we observed a small, controlled mob surrounding the 71-year old host. Being Midwesterners, it was a polite swarm but it also meant people were looking to have real chats, not just a quick scribbled autograph along a rope line. As we worked our way up we overheard homespun conversations about marriage, high school fight songs, and the lack of good trombone music today.

In the end, we were able to have the above photo taken with Keillor and were treated to a few quips about how he doesn’t trust marketers. As we were near the end, it was apparent that Keillor was patiently waiting until every fan got the conversation and photo that they wanted. It was only after the last audience member cleared out that he finally left. They had come to his home to consume his content and he wanted to reward them by being there for them.

You see where I’m going with this?

The Benefits of Crowd Work 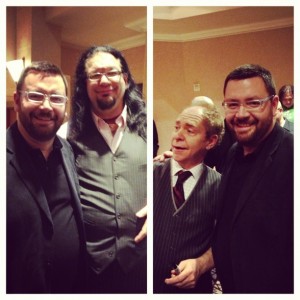 Coincidentally, the last time I experienced something like this was with Jay Baer, Lee Odden, Tom Webster, and Tamsen Webster when we saw Penn and Teller in Las Vegas. Like Keillor, they stayed in the lobby of the Rio until every fan had what they wanted (for them this is a several night per week commitment). Jay wrote a great post on how this was a brilliant way of turning your audience into social megaphones. I won’t regurgitate that post here, other than to point out the fact that when you take the time to do this sort of crowd work — photos, autographs — it doesn’t just benefit the crowd. These photos and stories about your brand are now shared online via Instagram, Facebook, and even blog posts like this.

Authentic, dedicated, and unexpected crowd work pays big divendeds in loyalty over time. As Jeff Rohrs, author of the book Audience, says, we have to cultivate and care for our online audience much like good performers do.

After the show, I found myself wanting to practice this kind of digital hospitality, this crowd work. Which brings us …

Back to Blog Comments

To be clear, we aren’t bursting at the seems with glowing comments and heated discussions on each and every post at Brand Driven Digital. A few pop up from time to time and we’ve employed Livefyre so many of the conversations on social outposts are integrated here as well. While the quantity may be low, blog comments demonstrate a level of commitment and participation in the community that amplifies their quality. Especially those that occur onsite. The other authors and guest bloggers here work to comment back on as many of these as possible to let our audience know that we’re here for them and we care about what they think.

In considering the idea of eliminating comments on our site, it’s really not about the mechanics of the website. It’s about the commitment of the communtiy. If someone wants to comment after reading a post, we want to be here for them. Sort of like sticking around outside the theater after the show. If you’ve taken the time for us, we’d like to offer the same to you.

Again, that’s our thinking for this site. That’s not to say that it’s what you should do or that anyone who does otherwise is wrong.

Ultimately, as we build communities around our brands online, we need to remember our crowd work. Whether it’s comments on your blog or listening on your social media accounts, you need to remember the needs and wants of your audience. Especially those who take the time to talk to you.

What kind of crowd work are you doing? I’d love to hear in the comments below or on a social network of your choosing.