Normally, when I check my email in the mornings from bed, it’s just to make sure there’s nothing on fire before I begin my day. On Wednesday though, I shot out of bed when I saw an email from Shutterfly congratulating me on my recent delivery. No, it wasn’t talking about a delivery of cards, but a deliver of the human type. For those who don’t know me, I am definitely not a new mom, or anywhere near being one, so this was quite the shock.

As I do with most content that I find humorous, I took to Instagram and Twitter to share this email mishap, and found that many of my friends, also non-moms/dads, received the exact same email. Quickly, conversations and screenshots similar to mine began showing up on Twitter and Facebook aimed at Shutterfly asking, “Do you know something that I don’t?”

What You Can Learn from How Shutterfly Responded

About as quickly as the tweets were flying in, responses from Shutterfly came in return. While generic, the responses included an apology and elicited many kind responses from users who were just happy to know this was an error, rather than a legitimate targeting. After a few hours, the company also posted a public apology on their Twitter, which was also taken positively. And at approximately nearly midnight (CST), users received an email apology, as well. 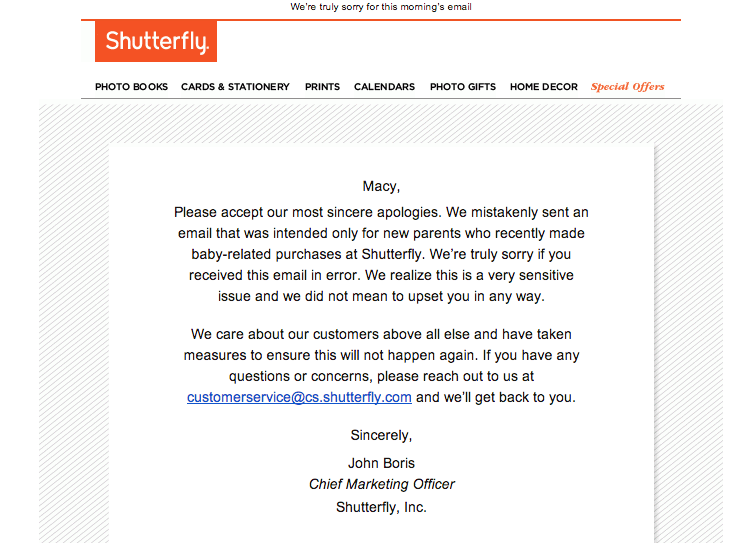 Let’s take a look at what we can all learn from how this brand responded in a moment of crisis.

1. Respond Quickly to Put Out Fires

Shutterfly was spot on in beginning to respond to users. While generic, the responses at least showed that the company was listening, and most users could assume that they were quickly meeting to figure out a more robust response. If they hadn’t responded, I’m sure more comments would have come in saying how they were ignoring the messages and feelings of the senders. 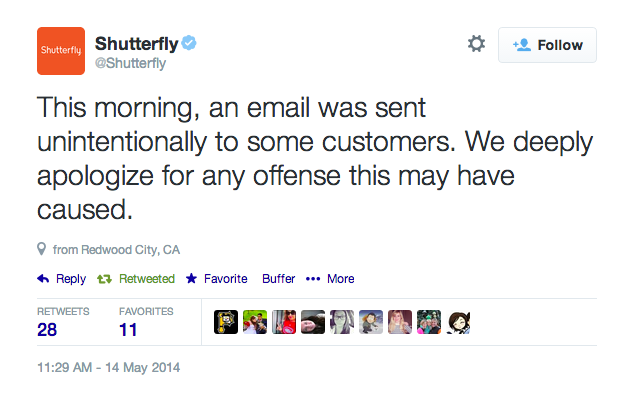 2. Be Transparent (We’re All Human)

Shutterfly is definitely not the first and, more than likely, not the last brand who will make a mistake online. Continue to show your audience that there are humans who are operating your social platforms. The more that fans and customers feel that they know your team, the more likely they are to be forgiving and understanding. This is less so when they view you as just another “big brand.” 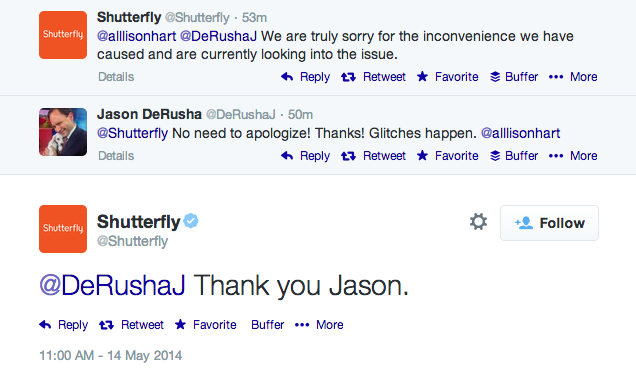 3. Show That You Care

While Shutterfly did tweet a public response, they also spent over four hours responding to the initial individual tweets. In my eyes, I appreciate this more than any other way they could have responded as it shows that they wanted to let each and every user know that they were sorry, even if this meant a big chunk of time out of their day. This is a fantastic example of a 1:1 customer engagement. 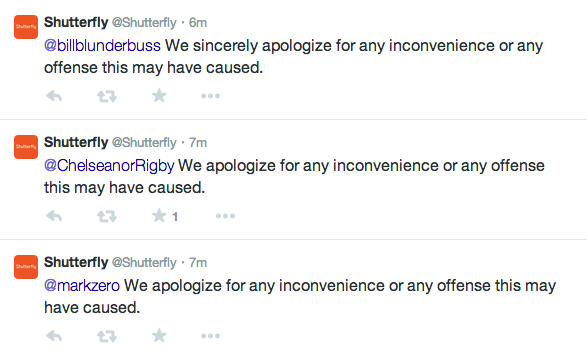 4. Build Your Army So the Troops Are Ready

By build an army, I mean constantly be building (and rewarding) your community of fans and advocates. Not only are they usually the small percentage that will spread word-of-mouth buzz for your brand, but they are also the ones who will come to the rescue when things go bad. Shutterfly had many customers who “fought” their battle in response to comments helping to highlight that “accidents happen” and “they didn’t mean to do this.” 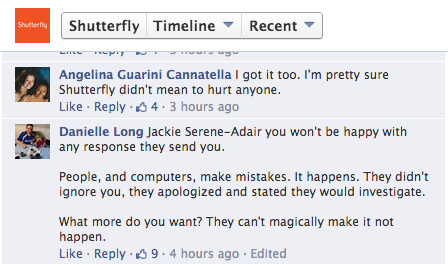 5. Don’t Let This Scare You

While we may not know yet what this email boo-boo means in terms of sales, customers, and profit for Shutterfly, we can assume that this innocent mistake is not going to end the company. Something like this is forgettable and forgivable if handled correctly. As my high school coach (and probably yours, too) used to say “Don’t let the fear of striking out keep you from playing the game!”

Were you a recipient of the Shutterfly email? Has it affected your opinion of the company? What action would you have taken if you were in their marketing department?

We’d love to hear your feedback!