The Do’s and Don’ts of Using Tumblr for Business

The Do’s and Don’ts of Using Tumblr for Business

Tumblr is like that scary-looking machine at the gym that only a handful of people know how to work and everyone else is afraid of using because they don’t want to be embarrassed or just don’t want to put in the effort to learn how to use it. In reality that machine, when used effectively, can be a great supplement to your already great workout.

It’s true that Tumblr is a little different than all of the other social networks. It’s a little confusing and perhaps a little intimidating. To make things easier, let’s take a look at a few do’s and don’ts when navigating Tumblr for your business. Whether your organization decides to create their own blog or pay Tumblr for sponsored ad space, there will be advice and examples of both to help you get started. 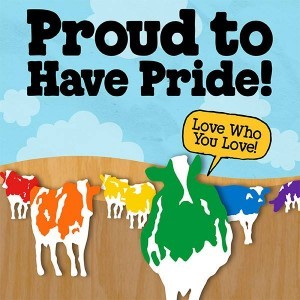 Tumblr doesn’t have as broad a demographic as other networks, such as Facebook or Twitter. The average Tumblr user is 14–25 years old, politically left leaning, and a minority. A minority meaning anyone who isn’t a white straight able male. Tumblr’s audience is among the youngest with 45% being under 35 years old and about 30% of all Tumblr users being Hispanic or African American, which is more than 15% above the average on other social networks. These users are deeply concerned with political and/or current events but are also very loyal to brands that have a vocal opinion on politics that they themselves most associate with. Ben & Jerry’s recently posted a photo on Tumblr showing their support for the LGBT movement, creating a lot of support and conversation for their brand.

If you’re more of an apolitical brand, that’s okay and, in some cases, probably even better. The average amount of time spent per visit is 23 minutes, longer than any other social network. In 2013 Tumblr grew 74% while the second runners up were Twitter and LinkedIn who grew only about 40%. The best advice is to do some research or hire/use someone with Tumblr experience to get the blog running. Its platform is different than all of the others, but because of the strong user loyalty this can be a great move for your brand.

Tumblr is known as a “safe space” for many of its users. There is a very large community who have mental traumas such as PTSD, anxiety, phobias, etc. As well as users with epilepsy or panic disorder who don’t respond well to some types of visual content. Therefore if a person with war PTSD blacklists posts that contain the words gun, war, violence, and the like; any posts that contain those words, whether in the post or in the tags, will not show up on their dashboard. This helps a lot of users feel safe and not as worried as they might feel on other networks like Facebook or Twitter. If you believe you have a post that might contain anything mildly triggering, it’s best to post that word in the tags or that word preceded by ‘tw:’ which stands for trigger warning.

Recently the movie Poltergeist had a sponsored ad that had no graphics; only a little phrase with no connotation that it would lead to a horror movie site. Nike and even Taylor Swift had used that form of advertisement in the past, so clicking it had always seemed safe. When clicked, it took the user to a blog that featured a “screamer” and caused many with anxiety problems and epilepsy to have bad attacks. Users are now trying to begin petitions to ban horror movie ads from Tumblr as a whole as they are beginning to feel unsafe.

Tagging posts is a great way to show your community that you care and are willing to accommodate their needs. And tagging, just like on Twitter and Instagram, is a great way to get users to interact and engage with your blog in general.

Interact with Fans and Followers

Tumblr makes communication easy between the brand and the customers so don’t be afraid to interact with them! Two official television blogs for the shows Orphan Black and Hannibal are known for their fun and engaging interactions with fans. Leave your askbox open and answer any and all questions you wish, which can be answered publicly or privately. The Orphan Black blog encourages users to ask questions and get more involved with the show by setting up times when they’re available for Q&A. 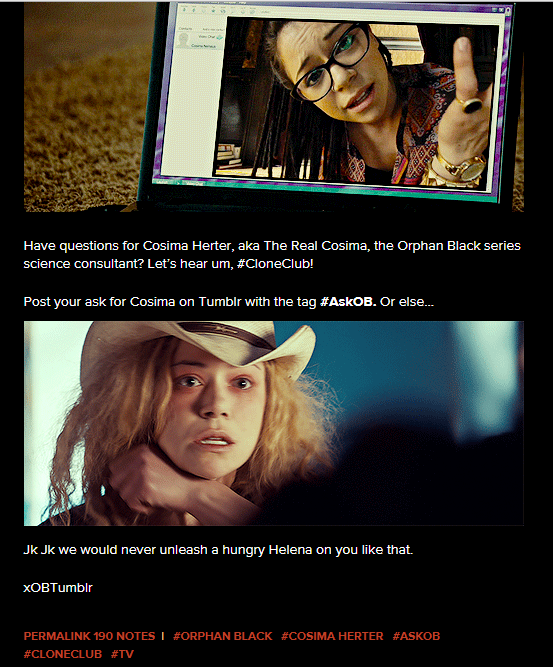 Both blogs also encourage fan creativity by reblogging art, stories, GIFs, and photosets. Hannibal has a page on its blog exclusively for fan art. 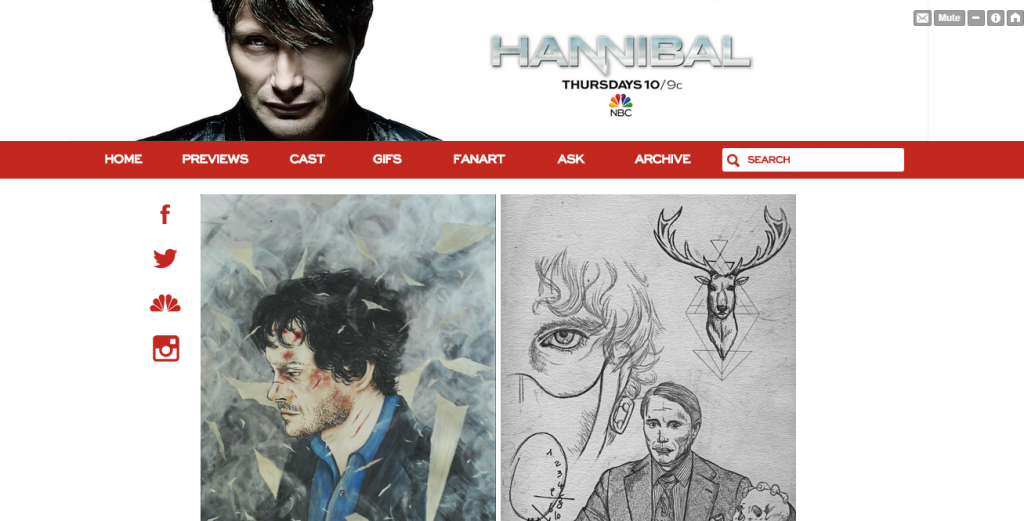 Denny’s has one of the most popular brand blogs among Tumblr users because of their ability to be casual and fun with their posts. Tumblr jokes are rapidly changing and Denny’s always finds a way to make a funny, relevant post that everyone looks forward to. Each post is original and has a lot of personality to it, as if the Denny’s blogger is just an average everyday user.

They also encourage users to post funny pictures while at Denny’s and they aren’t afraid to be too weird because they understand that’s what the Tumblr community embraces most. Along with their sarcastic witty banter.

Tumblr has several ways to post: text, photo, video, audio, quote, and even GIFs. (And there are a lot of GIFs on Tumblr.) Tumblr makes it easy to embed YouTube and Vine videos. Tumblr is also an option when posting photos or videos from Instagram. General Mills has a colorful and exciting blog where they post fun videos, animated GIFs, and photos of cereal related things.

Once established, your blog can become a fun and engaging place that provides a platform for easy customer communication and relationships. It can be as serious or as silly as you want, just keep in your target audience in and don’t be afraid to look up successful Tumblr examples like these to get ideas on how to jumpstart your blog.

What are your favorite Tumblr strategies?