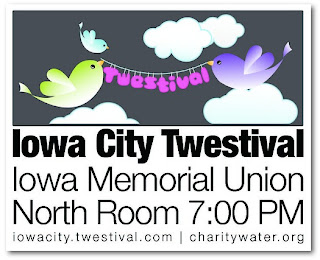 Westergaard Advertising is proud to be a sponsor of the Iowa City Twestival (Twitter + festival). This is a local “tweet-up” that is part of a global initiative harnessing the power of the Twitter community to raise money for Charity:Water — an organization working to bring clean drinking water to the 1.1 billion people without it. The Iowa City Twestival will be held in the North Room of the Iowa Memorial Union at 7 PM this Thursday, February 12th. More event details can be found here.

In addition to seeing what happens when you take social networking offline, you can purchase raffle tickets with a chance to win several cool prizes including a chance at a custom “Follow Me on Twitter” T-shirt from WA. However, we must give the appropriate props for this idea and the template to self-described creative superfreak Ted Murphy.

Hope to see you at the Twestival! I’ll be wearing my shirt.

This entry was posted in Marketing Integration. Bookmark the permalink.