With the political season upon us, there’s a lot of partisan messaging flying around our social media channels. As opinions tweet past us at record speeds, hard data on public sentiment is becoming more important that ever. Recently I chatted with Sara Goo, Senior Digital Editor at Pew Research Center, about their strategy for connecting their information with those who need it most via social media channels like Twitter and Instagram.

Some industries have a stigma that they aren’t ‘sexy’ enough for social media. Pew Research Center has jumped in with both feet and uses social media to share the data that’s the backbone of your brand. Can you tell us a bit about your social strategy?

At Pew Research Center, we want to be on the social media platforms that make the most sense for our audience, which is a global one. Traditionally, it’s been journalists, academics, policy-makers and other influential people who want to discuss and influence the public discourse on a range of topics. Social media allows us to speak more directly to the engaged public, particularly smart, engaged people who are looking for facts, data and analysis from a non-partisan source. Especially at a time when there’s so much inaccurate or biased information out there, it’s hard to sort out the facts.

Plus, one well-known project to the digital crowd, Pew Research Center’s Internet & American Life, studies digital habits and many of those researchers and other experts here are active on social media as individuals. From our own research we know two-thirds of online adults use social networking sites, so we know we need to be there. 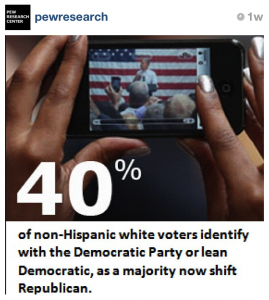 We started our @pewresearch Instagram as an experiment – and we’re still figuring out what works for us and our audience. I love Instagram and I’ve personally used it for a while. I really had no idea whether charts and data would work, but we learned very quickly that people love it. We grew a nice-size audience without promoting it much. And people gave us great feedback — they want beautiful data visualization on that platform. But they also respond to timely information as well. So we try to save our better visuals for Instagram. We post photos, too. It’s been a great way to let people inside Pew Research and see who the researchers are behind the work.

You also have a presence on SlideShare, which seems like a strong fit as it turns data into actual social objects. Why is making your data sharable important?

It really goes to our mission to inform the public. We share because information is what we do. Pew Research has always shared data – reports are published online, of course, and we make our raw data available for other researchers. We will continue to take steps in that direction to share even more. We need to be on the platforms where our audiences want our data and we’ll continue to experiment to see what works. 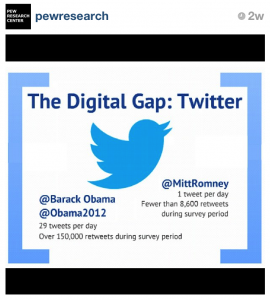 You have a lot of followers on multiple platforms like Twitter and yet you don’t follow a ton of people. Can you tell us about your follow-back strategy?

Yes, I joined Pew Research not too long ago after more than a decade as a digital editor and reporter at The Washington Post. I was initially surprised to find that @pewresearch wasn’t following anyone on Twitter. We’re basically following ourselves, or rather, our other project Twitter accounts!

One challenge is that we are a relatively small organization and aren’t currently equipped to manage all that. So we’re looking at that. But it’s not like we aren’t following people on Twitter lists or following the conversation on Twitter generally. Everyone on our digital team pays attention to this. And some of our researchers are really active in social media as part of their work and their research so they are part of the conversation in the topics they cover. If you’re interested in health and technology, for example, you should follow @SusannahFox from Pew Internet & American Life.

How is your internal social team organized? What tools do you use?

We are experimenting with a lot of different tools and I haven’t yet seen one tool that is able to manage everything in one bucket, which would be ideal. We’ve experimented with Topsy, with TweetReach and Hootsuite and other more standard ones like bitly and Google Analytics. We are a little different in that we aren’t advertising-driven. So, the analytics matter, but it’s not pure clicks of course but audience and influence that really mean success. 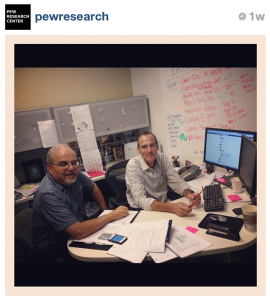 Social media is moving target for brands. What’s next for Pew Research Center?

We are looking to do more data visualization and stay on top of that. We also are just trying to be more strategic about our various platforms and who manages what. I think it’s important that you have people who really understand and hang out on Pinterest, for example, manage Pinterest and so on. We also just want to engage our digital audience more and interact with them and find better ways to use social media to inform the conversation. For example, we’ve done a couple of live Facebook chats that invite people to ask our researchers questions on big reports. We held one recently to discuss our really interesting report on the middle class called, ‘The Lost Decade of the Middle Class.”

If there’s one word you could use to sum up the benefit that Pew Research gets from social media, what would it be and why?

We’re able to share our data and research on platforms with people where they hang out and that’s always changing. It’s great to get feedback from our audience and find out what they want to know and what they think about the research. Our researchers work so hard, so it’s nice to get that immediate response.

Great insights — thanks for sharing Sara! If Pew Research Center can make data social, what’s holding you back? What can you do to be a part of social media’s visual revolution?

DECISION 2012 BONUS! Check out this narrated slideshow (more visual content!) on the digital gap between the two presidential campaigns this year.