Does Your Brand Have Kred? (Interview) - Brand Driven Digital

Does Your Brand Have Kred? (Interview)

Something exciting happened recently when I wrote a post on the updates to Klout. A commenter asked if I knew much about Kred. I confessed that, while I was familiar with it and knew the network was in the general category of social influence, I didn’t know as much as I should. As it turns out, that commenter can fix that for all of us as it was none other than Andrew Grill, CEO of Kred. He generously offered to walk us through how Kred works, how it’s unique, and what it means for your brand.

For those that don’t know, can you give us Kred’s elevator pitch?

Kred measures your personal Influence and Outreach in social media communities connected by interests. Kred Story is a visual history of your Social Media Influence that makes it fun and easy to understand how you came about your influence, and allows you to discover people with similar interests.

To address the elephant in the room, how does Kred compare with that other social measure of influence that also starts with a ‘K’ — Klout? 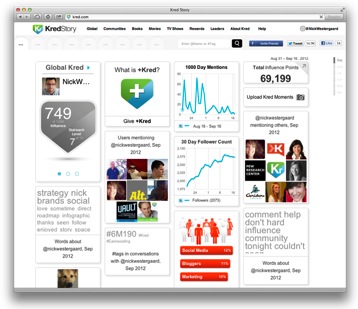 Klout has been in the market 4 years, and Kred just under 12 months. I’d like to think the market sees Kred as an extremely valuable and credible competitor. I also think we keep Klout on their toes and are forcing the market in general to innovate, rather than just hang on “the score.”

The only elephant in the room to me is transparency. Since launch Kred has been the only fully transparent social influence measure. Anyone can view their activity statement to see the actions that built their Kred. Since 2008 we have had access to the full Twitter firehose, so we are looking at a larger amount of data to determine our score. This allows us to pinpoint communities in which people are influential, instead of telling someone they are influential about a random topic like “cheese.”

Our real-time scoring means that Kred scores are updated as they happen, rather than waiting for days to see a change in your score due to recent activity. We are the only platform to have a complete activity statement (think frequent flyer statement) for each and every one of our 120 million Kred profiles. You can see when and why your Kred score changes in real time.

We were also the first platform to measure real-world influence, and our Kred Moments allow users to submit achievements and have them recognised by an increased Kred score, as well as acknowledgement on their activity statement.

With the rise of Pinterest, Instagram, and updates to networks like Facebook, social media is becoming more and more visually focused. Kred is a very visual and interactive experience. What can you tell us about this and why it was important to show influence and outreach so dynamically?

Many people find social influence daunting and elitist, but with Kred we aim to make it easy and intuitive. We take Influence beyond scores and data to reveal the posts, pictures, links, and achievements that build your Kred. By going “beyond the score” to give meaning and analytics to what content helps shape your online influence, we believe we are helping to demystify the notion of online influence.

While also providing a graphically rich experience, each one of the panels shown on Kred Story is clickable, and uncovers the story behind the numbers with rich analytics.

Who do you see as Kred’s target audience? 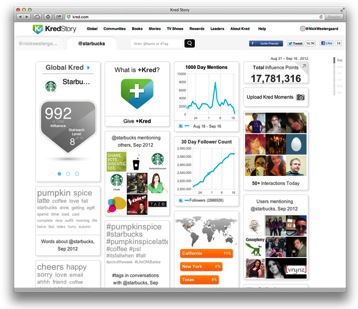 We believe that everyone has influence somewhere, so really anyone who uses Twitter, Facebook, or social media in general will love Kred.

Are you planning to monetize Kred? If so, what can you tell us about the model?

We have a number of programs in place already to monetize Kred. One of these is to work with brands to connect them with their key influencers in a transparent way. We do this with Kred Rewards, our program for targeting influencers, Kred for CRM, an app that integrates social signals into CRM platforms such as Salesforce.com, and Kred Events, a real-time leaderboard that ranks the most influential people talking about a topic or event.

In addition to discussing the intersection of branding and social media, I’m also curious about how brand building works for social properties. What can you tell us about the ethos of the Kred brand that you’re creating?

Our driving mission is that social data should be open and accessible to everyone. In effect, we are all about giving big data to little brother. We believe that by collecting and indexing the vast flow of digital conversations, we give personal insights that nurture relationships. We want people to see Kred as a positive tool to find connections with similar interests, not just a number.

When you sign up for Kred you also get a free copy of Brian Solis’ ebook The Rise of Digital Influence (very cool BTW). What role do you see influence playing on a larger scale as part of our brands’ social experiences? 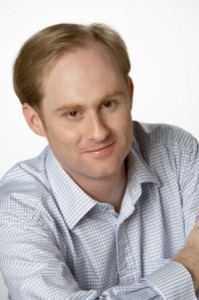 This was a promotion we ran in conjunction with Brian’s book release. We’ve further expanded the notion of being rewarded for influence by launching Kred Rewards, a program where brands can get their product or service in the hands of key influencers. Our deep datamine allows us to precisely target key influencers in specific communities, ensuring a brand is putting their product in the hands of true advocates, not just those with the highest “score”

In the future, I believe that we will see the rise of peer advocacy, where traditional forms and channels of advertising are replaced by trusted recommendations from your network. Influence plays a big part in this, because as humans we want to know who are the most influential and respected in a particular field or community.

What’s next for Kred?

We want to integrate even more social signals into the Kred Influence score, such as LinkedIn and Google+. We also see Kred Story growing tremendously — whether it be a brand creating a customized Kred Story to monitor social chatter, or a consumer constantly turning to Kred to discover social conversations surrounding their favourite movie releases, books, etc.

Thanks Andrew! It certainly sounds like Kred is a credible competitor, indeed. For more information, check out the video below and Kred.com.

Andrew Grill is the CEO of Kred, the measure of Influence and Outreach in communities connected by interests. A disciplined executive with a record of building social marketing campaigns based on deep analytics, Grill is one of the world’s foremost advocates of engaging influencers and ‘local rockstars’ to foster strong customer relationships. Previously Grill was Head of International Client Strategy for Visible Technologies. He is also the editor of social and technology blog www.LondonCalling.co. He can be found on Twitter as @andrewgrill.