What Your Brand Can Learn from Comic-Con

What Your Brand Can Learn from Comic-Con

The first Comic-Con was held in 1970 and had just over 100 guests. So how did a “comic geek convention” held in a small basement turn into a worldwide event amassing hundreds of thousands of fans?

They weren’t afraid to change their content to reflect the changing tides of entertainment.

As mentioned previously, Comic-Con began in 1970 featuring only 25 booths and three speakers. They did this to raise funds for a possible larger convention in the future. Little did they know just how large this convention would become.

For the first six years, the convention consisted solely of comic book material and events. It wasn’t until 1976 that the first ever “exclusive first look” was revealed for a film. George Lucas set the trend by featuring his new movie Star Wars.

This started the ball rolling on bringing in convention-goers who were fans of the sci-fi/fantasy genre that had never taken part in comic books.

In 1979, Superman made its debut followed by Tim Burton’s Batman in 1989. Though they branched out into the film medium they had stayed in the comic book-adaptation genre.

In 2000, Comic-Con unveiled its first Independent Film Festival that welcomed films of all genres to debut their non-distributed works. It was at this point when the event began to gain more acceptance and attention from non-comic book readers who also maybe weren’t fans of the superhero genre.

In 2001, big-name Hollywood sci-fi/fantasy movies were featured including Lord of the Rings and Planet of the Apes.

Despite Marvel’s attendance at the convention for a few decades they didn’t host their first panel with directors and actors until 2007. The featured films were The Incredible Hulk and Iron Man. Though it wasn’t uncommon for actors to take part in the convention, it was at this time that Comic-Con became a lot more “Hollywood.”

Starting in 2010, Comic-Con began to sell out of all its tickets in just one day. You may think that 46 years is a long time for something to grow so huge, but it’s important to remember that this began as a very small convention strictly for comic book fans and is now the global event for all things entertainment.

So How Did They Accomplish This?

It comes down to something very simple: giving the fans’ (consumers) what they wanted. It would have been easy for the creators to decide that they were going to remain a convention only for comic books. It is called “Comic-Con” after all, and many may have thought it best to stay focused on that form of entertainment.

They also probably realized that fans, and consumers in general, aren’t one dimensional. Most people don’t like just one thing; in fact most people who like comic books will probably also enjoy the movies based on these comic books. And some of those people enjoy movies in the science fiction and fantasy realm. Then later on down the road, those same people also enjoy certain fantasy video games.

Following what consumers want may seem like an easy thing to do on paper, but sometimes putting that into action can be difficult. It has been shown time and time again that businesses willing to adapt to new trends will remain successful in the long run. 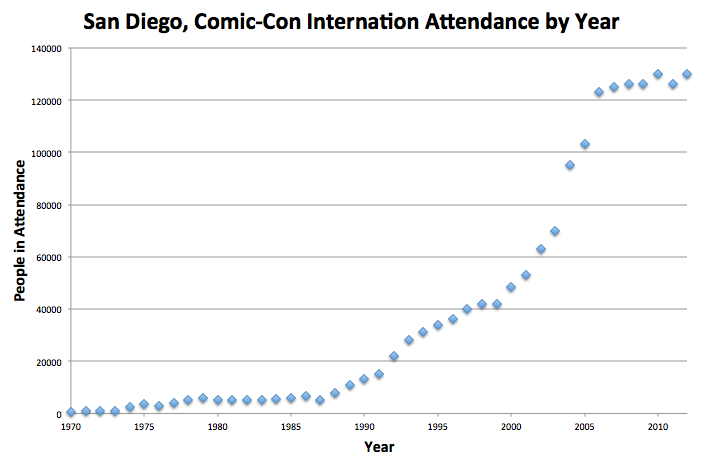 Many may worry that changing too much will negatively affect your “brand” but this Comic-Con example perfectly illustrates that you can insurmountably change and still keep your values and brand at your very core.

Comic-Con has still preserved their loyal comic book fans while amassing hundreds of thousands who aren’t and everyone is happy.

The goal is to never become stagnant. It’s always good to ask, “How can we be better for our consumer?”

Even now, Comic-Con is still changing to fit its user base. Television never played a huge role in Comic-Con until about 6 years ago when it became more common to be engaged in shows such as The Walking Dead and Game of Thrones. This past weekend’s Comic-Con, television events and panels far surpassed films with over 60 shows represented and just about 25 movies — because that’s what people want to see.

You’re in a business because you have a service or a product that people want. Don’t be afraid to listen to what those consumers are telling you.